Stone Harvest by Kelly Nicholson is now exclusively sold at AMERICANA Classic Vintage. Stone Harvest is a line of jewelry based on a series of paintings on antique photographs. Kelly imbeds these images also on pendants and pins to be worn, like cameos & lockets.

The photographs used in this series were found in flea markets and antique stores in Ohio & New York. 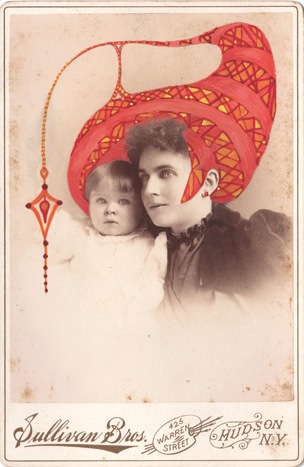 Kelly started buying old photographs that “spoke” to her and which asked for the story behind their soft & faded faces to be told.  She gives new life to the old photos by giving them costumes of fanciful headpieces, hats and embellishments.

Stone Harvest was created by Kelly Nicholson who was born in 1977 in rural northern Ohio.  She earned a B.F.A. with a concentration in sculpture in 2005 from the School of Visual Arts in New York, and a M.A. in Art Education from Brooklyn College in 2007.

Kelly chooses to live either near the woods or the beach, where she spends her time observing and collecting things to use in her artwork. She also prefers to visit antique stores and junk shops instead of museums, because as she says, “in museum you aren’t allowed to touch anything.”

Learn more about the artist here.